WHAT IS THE HONORARY DEGREE? HOW TO EARN AN HONORARY DOCTORATE DEGREE? 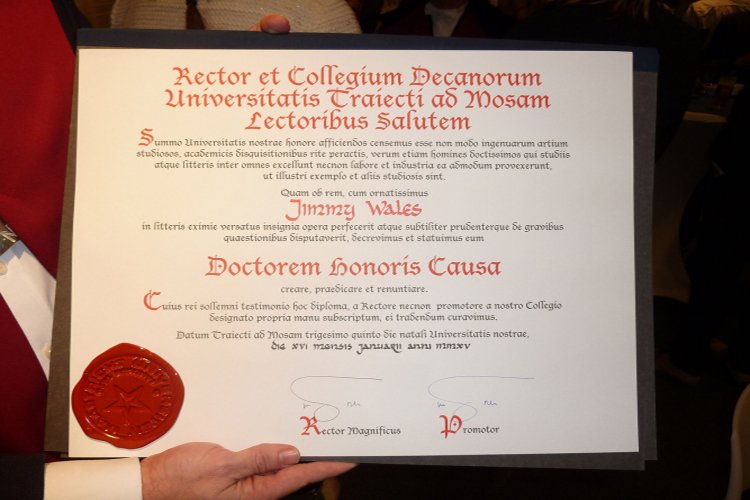 An honorary degree is an academic degree for which a university (or other degree-awarding institution) has waived all of the usual requirements, such as matriculation, attendance, course credits, a dissertation, and the passing of comprehensive examinations. It is also known by the Latin phrases honoris causa ("for the sake of the honour") or ad honorem ("to the honour"). The degree is typically a doctorate or, less commonly, a master´s degree, and may be awarded to someone who has no prior connection with the academic institution or no previous postsecondary education. An example of identifying a recipient of this award is as follows: Doctorate in Business Administration (Hon. Causa).

The degree is often conferred as a way of honouring a distinguished visitor´s contributions to a specific field or to society in general.

It is sometimes recommended that such degrees be listed in one´s curriculum vitae (CV) as an award, and not in the education section. With regard to the use of this honorific, the policies of institutions of higher education generally ask that recipients "refrain from adopting the misleading title" and that a recipient of an honorary doctorate should restrict the use of the title "Dr" before their name to any engagement with the institution of higher education in question and not within the broader community. Rev. Theodore Hesburgh held the record for most honorary degrees, having been awarded 150 during his lifetime.

Honorary degrees are usually awarded at regular graduation ceremonies, at which the recipients are often invited to make a speech of acceptance before the assembled faculty and graduates – an event which often forms the highlight of the ceremony. Generally, universities nominate several persons each year for honorary degrees; these nominees usually go through several committees before receiving approval. Those who are nominated are generally not told until a formal approval and invitation are made; often it is perceived that the system is shrouded in secrecy, and occasionally seen as political and controversial.

The term honorary degree is a slight misnomer: honoris causa degrees are not considered of the same standing as substantive degrees earned by the standard academic processes of courses and original research, except perhaps where the recipient has demonstrated an appropriate level of academic scholarship that would ordinarily qualify him or her for the award of a substantive degree. Recipients of honorary degrees typically wear the same academic dress as recipients of substantive degrees, although there are a few exceptions: honorary graduates at the University of Cambridge wear the appropriate full-dress gown but not the hood, and those at the University of St Andrews wear a black cassock instead of the usual full-dress gown.

An ad eundem or jure officii degree is sometimes considered honorary, although they are only conferred on an individual who has already achieved a comparable qualification at another university or by attaining an office requiring the appropriate level of scholarship. Under certain circumstances, a degree may be conferred on an individual for both the nature of the office they hold and the completion of a dissertation. The "dissertation et jure dignitatis" is considered to be a full academic degree. See below.

Although higher doctorates such as DSc, DLitt, etc., are often awarded honoris causa, in many countries (notably England and Scotland, Ireland, Australia, and New Zealand) it is possible formally to earn such a degree. This typically involves the submission of a portfolio of peer-refereed research, usually undertaken over a number of years, which has made a substantial contribution to the academic field in question. The university will appoint a panel of examiners who will consider the case and prepare a report recommending whether or not the degree be awarded. Usually, the applicant must have some strong formal connection with the university in question, for example full-time academic staff, or graduates of several years´ standing.

Some universities, seeking to differentiate between substantive and honorary doctorates, have a degree (often DUniv, or Doctor of the University) which is used for these purposes, with the other higher doctorates reserved for formally examined academic scholarship.

The Archbishop of Canterbury has the authority to award degrees. These "Lambeth degrees" are sometimes, erroneously, thought to be honorary; however the archbishops have for many centuries had the legal authority (originally as the representatives of the Pope, later confirmed by a 1533 Act of Henry VIII),to award degrees and regularly do so to people who have either passed an examination or are deemed to have satisfied the appropriate requirements.

Between the two extremes of honoring celebrities and formally assessing a portfolio of research, some universities use honorary degrees to recognize achievements of intellectual rigor. Some institutes of higher education do not confer honorary degrees as a matter of policy—see below. Some learned societies award honorary fellowships in the same way as honorary degrees are awarded by universities, for similar reasons.

A typical example of university regulations is, "Honorary graduates may use the approved post-nominal letters. It is not customary, however, for recipients of an honorary doctorate to adopt the prefix ´Dr.´" In some universities, it is however a matter of personal preference for an honorary doctor to use the formal title of "Doctor", regardless of the background circumstances for the award. Written communications where an honorary doctorate has been awarded may include the letters "h.c." after the award to indicate that status.

The recipient of an honorary degree may add the degree title postnominally, but it should always be made clear that the degree is honorary by adding "honorary" or "honoris causa" or "h.c." in parentheses after the degree title. In some countries, a person who holds an honorary doctorate may use the title "Doctor" prenominally, abbreviated "Dr.h.c." or "Dr.(h.c.)". Sometimes, they use "Hon" before the degree letters, for example, "Hon DMus".

In recent years, some universities have adopted entirely separate postnominal titles for honorary degrees. This is in part due to the confusion that honorary degrees have caused. For example, an honorary doctorate from the Auckland University of Technology takes the special title HonD since it is now common in certain countries to use certain degrees, such as LLD or HonD, as purely honorary. Some universities, including the Open University, grant Doctor of the University (DUniv) degrees to selected nominees, while awarding PhD or EdD degrees to those who have fulfilled the academic requirements.

Some universities and colleges have the custom of awarding a master´s degree to every scholar appointed as a full professor, who had never earned a degree there. At the universities of Oxford, Dublin and Cambridge, many senior staff are granted the degree of Master of Arts after three years of service, and at Amherst College all tenured professors are awarded a Master of Arts degree at an academic convocation in the autumn, even though the school only offers an earned Bachelor of Arts degree (Amherst awards honorary doctorates at commencement in the spring to notable scholars and other special invitees). Schools such as Brown University, the University of Pennsylvania and Harvard University also award tenured faculty, who do not have a degree from their respective schools, the AM ad eundem.

These ad eundem or jure officii degrees are earned degrees, not honorary, because they recognize formal learning.

Similarly, a jure dignitatis degree is awarded to someone who has demonstrated eminence and scholarship by being appointed to a particular office. Thus, for example, a DD (Doctor of Divinity) might be conferred upon a bishop on the occasion of his consecration, or a judge created LLD (Legum Doctor) or DCL (Doctor of Civil Law) upon his or her appointment to the judicial bench. These, also, are properly considered substantive rather than honorary degrees.